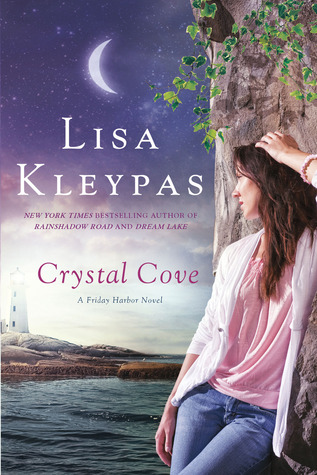 You guys, every once in awhile I need a break from YA and just want to delve into some adult romance. It's like a reading palate cleanser. Whenever I'm in one of those moods I turn to Lisa Kleypas. She writes these wonderful romance novels that aren't insipid and have female characters with some backbone. She's basically  my number one go to for adult romance novels. When I found myself in transit without a book a little while ago I stopped in at the gift shop and immediately picked up Crystal Cove, the fourth and final book in Kleypas' Friday Harbor series. I had read one of the earlier books, Rainshadow Road, and had enjoyed it, so I figured I would probably like this one too. While it's by no means my favourite of Kleypas' novels, it was fun and an enjoyable way to spend a ferry ride.

The thing about the Friday Harbor series that throws a lot of people off is that it's Kleypas' attempt at magical realism. Friday Harbor is a place that's a pretty down to earth small town, but some people  happen to have some sort of power. In Rainshadow Road, the main character could turn glass into butterflies. In Crystal Cove Kleypas takes it one step further and our protagonist, Justine, is a full fledged witch. She spent most of her life travelling around with her mother, never putting down roots so in adulthood she relishes the chance to run her own small town inn. She's happy with her life, but she's never been able to find love, something that she's always wanted. Her mother cast a spell on her when she was born to prevent her from ever experiencing heartbreak, which meant never finding true love in the first place. Justine is determined to break the curse no matter what the consequences. It's at this point we meet Jason, a rich businessman looking to invest on the island. Sparks inevitably fly as we see how far these two will go for love.

First things first, I don't mind magical realism. I tend to like the interplay between reality and this sort of other world power. That having been said, the magic needs to be well integrated into the story line or I find that it feels like two genres butting up against each other. With Rainshadow Road I felt like the magic was a bit of an afterthought. I didn't really get why it was included. However, two books later and I really feel like the magical realism has come a long way. Justine is a pretty typical woman who happens to be able to perform magic and it affects her day to day life. I was into reading about the romance and her struggle to come to terms with her powers. While it may not be for everybody, it really worked for me.

The romance itself was fun, although not my favourite. Jason is this majorly reclusive businessman who's made millions in the tech industry. He's controlling and more than a little manipulative. Alpha males in books can be fun, but I didn't love where it took him in this case. I get that Justine wanted love more than anything else, but I don't totally understand why she initially went out with him. Yes, he's rich and attractive, but he also represented a few things that she wasn't a major fan of as shown by her initial resistance. There's this sort of instant love/chemical attraction deal between the two of them that I just couldn't get behind so I never really bought into their romance. Plus, I remember Justine being this fun, spunky woman filled with backbone in the previous novel, but now she's just bending over to the will of some man. I don't get it.

There were some steamy scenes, but some also left me flat. Bondage isn't Kleypas' strength as far as I can tell. There were moments that reminded me of my favourite parts of other Kleypas novels, but overall it seemed like a  bit of a departure.

I was also hoping for a few more characters from the previous Friday Harbor novels to make an appearance, but they didn't. Justine's cousin is in it a bit, but I really missed the dynamic the characters shared in the past. There wasn't a ton of secondary character interaction in this one which is a shame because Kleypas has created an entire universe in Friday Harbor filled with some really fantastic characters.

I didn't hate Crystal Cove, but I certainly didn't love it. Kleypas remains one of my favourite romance novelists, but this one just fell a little flat. I will definitely go back to read the two books in this series I've missed, but if you're just looking to read the quintessential romance stick to her earlier Travis series.
Posted by Ashley at 12:00 AM