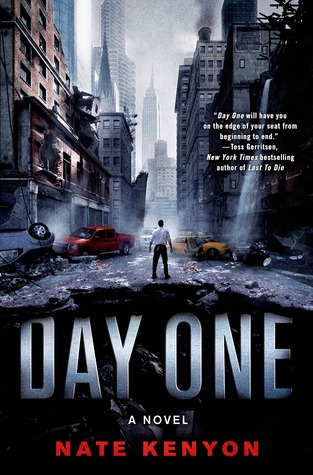 Full disclosure, I don't deal well with horror or thrillers or anything that could potentially keep me up at night because I'm still pretty sure that there are monsters under my bed just waiting for me to forget to pull the covers up one night. Keep that in mind when reading my review because I am a giant wimp when it comes to this kind of novel. Day One is kind of an action packed thrill ride type of novel. Like it's close to a Hollywood blockbuster, but you know, a book. There are tons of explosions, action sequences and conspiracies that keep you guessing. While it might not be my genre, I could see somebody really getting into it.

Day One  is set in present times, or at least something close to them. Hacker journalist John Hawke is investigating a potentially major story involving a tech company and its CEO. He was a successful New York Times journalist until he got caught hacking CIA files and was promptly dismissed; this job is his last shot. Hawke heads into the city like it's any other day, but soon the oddities begin piling up. There are Anonymous like protests happening and people are gathering on wall street, increasingly angry. Coffee pots explode, copiers rebel. Pretty soon the world devolves into a nightmare realm with technology turning on humanity and a small group of survivors need to make it through the city, fighting against an enemy nobody can see or identify.

My first mistake when reading this book was reading it on my iPhone. Not a smart move. Like half the time I was basically convinced that my phone would try to kill me or the camera would turn on to stalk my every move. Not that I was moving much, my couch is pretty comfortable. Like Day One explores a world gone mad with technology; a world where the machines we create turn against us. It's not that innovative of a concept really; haven't we been thinking about this since, I don't know, our first imagined robot? That having been said, just because a concept isn't all that new, doesn't mean the book isn't enjoyable. Day One falls squarely into the thriller genre. There is a ton of action that keeps the pace moving along and a conspiracy that doesn't quite fall into place until the very end. There's also the sort of rugged, leading man. He tries to be a decent person, but he's still a bit of an anti-hero, trying to change his ways for his family. His struggle to redeem himself provides the sort of B plot.

If I don't sound that enthused I don't blame the book; I blame the reader. I'm not a huge fan of thrillers and get easily annoyed with the cliches. They've never captured me and while I knew this going in, I also thought this sounded like a super intriguing premise because I haven't actually read a lot of technology conquers the world books all the way through. Plus I kind of loved that it was set in modern times and not some distant future. The references to Anonymous, hacking, all that kind of stuff rooted the story for me. It wasn't a huge jump for me to believe in all the tech craziness given what can actually be done with technology today and while I know there is a huge stretch between what can actually happen and the coding used in the book I was able to suspend my disbelief.

The pacing was fantastic for what the book was. It didn't lag. Basically as a reader I felt like I was on this giant roller coaster that kept me guessing and turning the pages. Did I mention I'm okay with mixed metaphors? However, what didn't work for me was a lack of anything else. The pacing didn't allow for major character growth. I never got to know Hawke and the secondary characters were basically just props. I also didn't feel like I got the best sense of why all this world ending was happening. Flashbacks were used to try to ground Hawke as a character and show us where he came from, but they didn't really work for me. They didn't do much for the story because it wasn't about who he was as a family man; the story really was about his quest for survival and not much else.

Honestly, I think Day One is a fast paced, tightly plotted thriller; it just wasn't the book for me. All of my problems with it stem from the fact that I don't deal well with the genre. Thrillers aren't meant to slowly build great characters; if they do that's great, but I think they've done their job if they prove to be an un-put-downable read. Day One succeeded at providing a thrilling read that I seriously couldn't put down/had me half certain all technology was out to get me. If you're a fan of thrillers I would definitely recommend giving it a try.
Posted by Ashley at 12:00 AM