Top Ten (Nine) Books I was "Forced" to Read 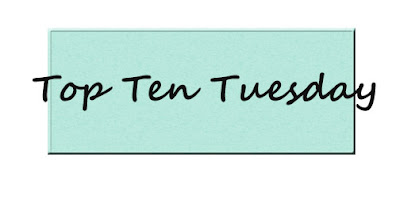 THIS WEEK'S PROMPT IS TOP TEN BOOKS I WAS "FORCED" TO READ
So I couldn't think of ten books that I read because of outside pressure, so I only went with nine and even then, this list might not be totally accurate. There are a lot of classics ahead.

1. To Kill a Mockingbird by Harper Lee
We had to read this book in Grade Nine English class and it's been one of my favourites ever since. It's heartbreaking and really one of the first books that deals with racism that I read in the classroom. Who doesn't love Atticus Finch?

2. Pride and Prejudice by Jane Austen
I was eleven years old when my Grandpa bought me this book for summer vacation. He was a retired teacher and didn't really believe in age limits on books. Sure I might not have understood it as well as I do now, but I was totally caught up in this classic story from the beginning. As anybody who reads this blog regularly knows, the love (okay, maybe obsession) continues.

3. Anne of Green Gables L. M. Montgomery
A classic Canadian story. It was my mom's favourite when she was growing up and she passed her books along to me. I just love the story of Anne with an E and all the trouble she gets herself into. From  dying her hair, to accidentally getting drunk in the afternoon with her kindred spirit Diane, I was there for it all.

4. A Game of Thrones by George R. R. Martin
This book is a more recent one that my roommate forced me to read. Literally. Forced. High fantasy, not normally my thing, but it was so much fun to talk about with her that it quickly became a favourite. I may not have read the entire series yet, but I'm sure I will eventually.

5. Harry Potter and the Philosopher's Stone by J. K. Rowling
I remember my best friend in elementary school raving about this book when it was first released in Canada. I immediately ran out and picked it up and it is still one of my absolute favourites.

6. Les Belles-Soeurs by Michel Tremblay
Les Belles-Soeurs is a distinctly Canadian play that I had to read in school over and over and over again. At first it was because I went to a french school and this is one of the preeminent Canadian plays. Tremblay was the first to write in joual; he wrote how people spoke in Quebec and is still one of the best Canadian playwrights and novelists. The humour and heartbreak found between a group of women licking stamps in a small Montreal kitchen is original and true to life. I love it.

7. Hamlet
This wasn't the first Shakespeare play I read, but it was my favourite. Romeo and Juliet and A Midsummer Night's Dream came before it, but I didn't fall in love with either of them. Hamlet however was a different story. The tale of betrayal and familial ties captured me and it's pretty much been a lifelong love affair with Shakespeare since then. Hamlet hasn't remained my favourite, but it will always have a special place in my heart. Although, Mackers is so much more fun to stage; stage blood is the best is what I'm saying.

8. Anna and the French Kiss by Stephanie Perkins
I wasn't really forced to read this one, but I had read so many rave reviews for it online that I just HAD to buy it. I'm not eagerly awaiting Isla and the Happily Ever After since Stephanie Perkins is on my autobuy list for life.

9. The Outsiders by S. E. Hinton
Another classic story that I fell in love with at school. Ugh, the end still makes me tear up after all these years.