Across the Universe by Beth Revis | Book Review 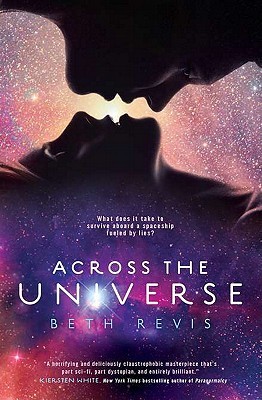 I feel like I saw a lot of reviews for Across the Universe around the time I first started blogging, but I didn't pay too much attention to it. It was science fiction which is definitely not my preferred genre so I let it slide past me without much of a second thought. So here it is, a few years later and I've finally picked it up. It really has more to  do with the fact that I was in a rush at the library and recognized the title than anything else, but I did say I wanted to break out of my preferred genres at the beginning of the year, so let's go with that one. It sounds better. I can't say that I all out loved Across the Universe, but it was definitely more enjoyable than I thought it would be. It was this combination of science fiction and dystopia that was intriguing, but at times frustrating. Weeks later and I'm still not totally sure what to think.

Amy is a seventeen year old girl who's signed on to be cryogenically frozen and shipped into space as cargo on the spaceship Godspeed. She's set to leave earth and arrive on a new planet some three hundred years in the future. However, her three hundred year sleep is interrupted fifty years too soon when somebody pulls the plug on her chamber nearly killing her. Soon after, it's discovered that other frozen people are being unplugged, not all of them surviving. Somebody is clearly trying to kill them. Elder was born and raised on the ship and is being prepped to take over as the future leader. You see, the ship has one person born to lead, others born to work on the ship and feeders, those born to grow food. There are plenty of secrets on the ship and as much as Amy might want to trust Elder, she's not sure if she can.

I'm sitting here trying to write this review and all I can think is that it didn't overwhelm me or underwhelm me; I'm simply whelmed. It's not that the book was bad and I can see why people loved it, but there were sections that I just didn't engage with and I'm not sure if I can put my finger on why that was. I know, that's a terrible thing for a review!

So the story is told in alternating perspectives which isn't always my favourite narrative choice, but it wasn't bad. Amy and Elder had very distinct voices and personalities so there was no problem deciphering who was who. It was actually kind of interesting to hear from somebody who has only ever known the ship and then from somebody who is brand new to it. The culture clash was something and Amy's frustration made total sense since once she arrives a whole lot of crazy becomes apparent.

I think the book kind of lost me with the beginning. It was a slow start. To be fair, I find I have this issue with a lot of science fiction novels; the same can be said about dystopia. I'm a very character driven reader and there is so much world building required with these genres that it loses me. I understand the necessity; it just doesn't engage me as a reader. That having been said, I really did start to enjoy the book once I got into the second half. Once mysteries were being revealed I needed to know more.

I have to say this is a pretty dark book. There's a pervading sense of hopelessness throughout the ship. I mean there is not a single person born on that ship who has ever seen proper ground; even the stars they see are a lie. It was difficult to read about and well the themes about lies, corruption and power eventually get a little heavy handed (you should see what the people on the ship believe about Abraham Lincoln), but it didn't seem like much of a stretch.

I know this isn't the best of most informative review because you guys, I really need help figuring this one out. My feelings were so mixed about this first book that I'm on the fence about reading the next one in the series. What do you all think? Does it get better? Is it an engaging continuation or am I going to be disappointed?
Posted by Ashley at 11:52 AM