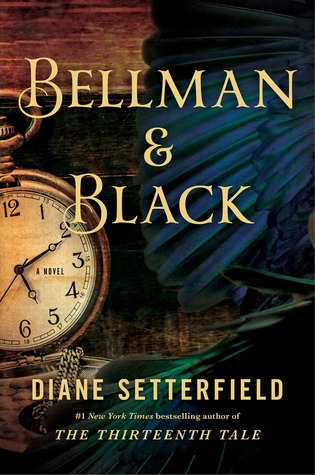 Recently I've been trying to branch out from my typical YA fare. It may seem a little nuts since I haven't been involved with the YA community for that long and I have so much catching up to do, but I've been missing my literary fiction. With that in mind I picked up Bellman & Black; Diane Setterfield's second novel. Now I haven't read The Thirteenth Tale, but I've heard some really good things about it so I was kind of looking forward to Bellman & Black just based on author reputation. I just didn't end up loving it as much as I thought I would.

What originally drew me to the novel was the premise more than anything else. It's described as a ghost story. William Bellman accidentally kills a rook when he's eleven years old, an incident that supposedly has a profound impact on his life. We jump ahead to when he is a young adult, leading a very happy life. He marries a beautiful woman, has healthy children and is amazingly successful in his business. However, the people he loves are slowly taken from him until it all ends in tragedy. A mysterious man dressed all in black has been at each funeral and as the deaths get closer to Bellman, the man offers him a compromise to save his favourite child, but it's a deal he can't fully remember.

That set up sounds kind of fantastic. It's a ghost story, a man haunted by death, but I just didn't think it panned out like I thought it would. I was expecting well a ghost or at least a little bit of creep factor. I didn't get any of that at all. Honestly, I felt like these life changing events left Bellman nearly completely unmarred. I would have loved just a little more humanity from him. The beginning is strong. Setterfield manages to build a sense of foreboding withing the first few pages. She has a very descriptive writing style that worked so well in setting tone. Like I figured something was going to happen after the innocent rook is killed.  As the deaths started piling up I was definitely creeped out, but that's where the book lost me.

While the tone and style worked, William never seemed like a fully fleshed out character. More than anything else he felt like an allegorical character more than anything else. He was only there to prove a moral point; he was a protagonist in a three hundred plus page book and it just didn't work for me. He was distant and lacked a human element. He was so focused on his work and making things run smoothly that he missed the real parts of life, the play and the grief. While I feel like it worked in getting across the overall message of the book I didn't want to read about a theme, I prefer reading about a person. It was hard to invest in him when he was invested in so little.

I also couldn't really get a feel for secondary characters. Bellman couldn't connect to them and therefore I as a reader couldn't. Some of them seemed to have interesting stories, but it's hard to say when we learn so little about them. Overall I would have loved to see some more character development throughout the novel.

I feel like the point of the book was that death comes for everybody and we need to take time out to appreciate life and grieve for the ones we lost; things that Bellman never did. Here's the thing though; I feel like that's a pretty well used/loved theme and I don't think this is the best example of it. There was a total disconnect between the tone and the plot. The basic plot was just so well known, man invests more in money than he does in life and there wasn't anything new in it.

I loved Setterfield's overall style. I loved the eeriness and have no complaints about tone or style. I would still love to read The Thirteenth Tale because writing wise Bellman & Black totally worked for me. I wish I could say I connected to this particular story more, but it left me flat. Well trodden themes and characters that I couldn't feel for made reading this particular book feel like a chore. However, I did gain a new appreciation for Setterfield's style and look forward to trying another book of hers in the future.
Posted by Ashley at 12:00 AM