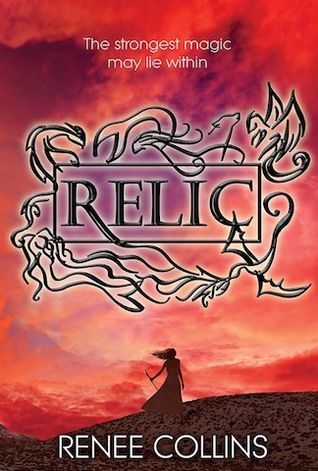 Where should I even begin with Relic. It's one of the few books that really defies genres, alternating between western, fantasy and romance. While at first the combination might seem like a bit of a stretch, I was intrigued and had to give the book a try. I'm really glad I did because while it was an imperfect read, it was thoroughly entertaining and managed to surprise me along the way.

The book begins with a small town burning to the ground leaving no survivors. Maggie Davis is living on the outskirts of town with her younger brother and sister; their parents are away for the evening when the fire is lit. At the end of the day only Maggie and her sister survive and must learn to scrape by on their own. In this world, ancient relics can be dug from the ground and used to harness powers such as fire, water, invisibility etc. Maggie begins working at a local saloon, but soon proves to have the ability to harness these powers and leaves the saloon to be trained under Alvar Castilla, a powerful man who runs most of the town. She must learn how to navigate the new rules she's living under while providing for her sister, but she also wants to figure out who is responsible for burning Messa before it happens again. Like I said, it's a blend of genres that defies most classifications.

One of my favourite things about Relic was Maggie. She's such a strong protagonist. She may not be physically strong and she doesn't make the right choices one hundred percent of the time, but she's always struggling to do the right thing. She accepts her new responsibilities and does everything in her power to protect those she cares about. She has some very admirable qualities that make her an excellent protagonist in a fantasy novel. Sometimes she's saved, but she's not completely powerless. I didn't find she fell into the damsel in distress trap, but she still showed some human foibles. I really love that in a character.

So I didn't mention it in my description of the novel, but there is some romance in Relic. I wouldn't call it the A plot line, but it does play an important role. Maggie falls for Landon, a local cowboy on leave. He's pretty great, thoughtful, kind, seems to genuinely care about Maggie. I did appreciate that romance didn't dominate the novel though. I mean I think the great thing about this book is that there was a bit of romance, but it was no more important in Maggie's life than her other relationships. She cared about her sister first and foremost and built friendships with some fantastic supporting characters along the way. Adelaide, the saloon's showgirl, is particularly remarkable. She's tough, but also naive and always hoping for something more than what she has. It's kind of heartbreaking and entirely captivating.

The fantasy element of this book was pretty much relegated to the magical relics; the rest was pure western. As somebody who's not a fan of high fantasy, this worked well for me. I thought there was a solid amount of fantasy to balance out the western aspects, but it never became overpowering. However, if you're really looking for a high fantasy novel, well this isn't the book for you.

There was one thing that worried me throughout the novel, the treatment of aboriginal peoples. Westerns don't have the best track record of making natives sympathetic characters and are either villains or occasionally the wise mystics. I was worried that this was the path that Collins was taking when the town burnings were blamed on a local tribe and the only native character renounced his heritage completely. Fortunately, I didn't have to worry about that in the end as the tribe's role was expanded beyond generic villain. While there were still some problematic scenes, overall I was pleased.

I didn't love Relic right off the bat, but in the end I thoroughly enjoyed reading it and would be happy to read anything else by Collins. It's a different sort of book and I wasn't entirely sure what to expect, but I ended up getting totally sucked into Maggie's story. Between the mystery and the magic I was intrigued and didn't want to put it down.
Posted by Ashley at 12:00 AM